Batelco signed the original Agreement with Star Solutions to install 4G LTE in the South Atlantic islands in March 2015.

I wrote about the history of 4G LTE in Part 1 of this post – A peek under the bonnet of the Falkland Islands’ 4G service: Part 1, 4G history. and I would advise looking at this before jumping in to read Part 2.

In this post, I will look at some aspects of the Falkland Islands’ 4G service from a technical perspective focussing on how voice calls and SMS texts may be managed. I am not privy to the exact technical approach undertaken by Sure Falkland Islands to build out the 4G LTE service but there are indications publicly available. 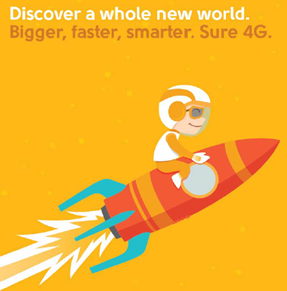 The 2G mobile phone service was introduced in the Falkland Islands in December 2005 by C&W, but I do not intend to talk about it in this post as Falkland Islanders are far more experienced about its benefits and deficiencies than I ever could be!

The work to design and install the islands’ 4G network was outsourced to a Canadian company called Star Solutions. Star Solutions was chosen, according to what was said in the Communications Week public meeting, because they have experience of building wireless networks in small scale scenarios. To quote their web site:

“Using network infrastructure equipment from Star Solutions, Mobile Network Operators (MNOs) around the world extend their mobile coverage to rural area. Often these areas have little or no infrastructure in place to support any telecom equipment and conventional rural connectivity solutions are inefficient and/or impractical.”

“The ideal solution for Falkland Islands was to leverage Star Solutions’ Sonata MSC/HLR and Sonata EPC core network platforms to build their updated network. These core network components were connected to a network of IP based 2G+4G base stations to offer GSM+LTE services including CSFB for voice. The network will be integrated to support inbound and outbound roaming as well as offer pre- and post-paid billing to its customers.”

It is not my intention to go into any depth about the technical and project challenges of implementing a 4G network, but from this sparse overview we can glean two points that are worth talking about that are emboldened above.

In earlier generations of mobile networks when voice calls were the main service being delivered, services were based on what was known as circuit-switched networks. When a number is ‘dialled’, a path is set up from the caller to the recipient that usually involved several carriers. Once the path is complete, the caller and recipient are connected after a dial-tone is created and the recipient accepts the call. This is exactly the same technology as used on land-line calls.

However, with 4G LTE the network the prime service is now data which is packet-switched i.e. Internet Protocol (IP) packets as used on the Internet.

Circuit switching has been entirely eliminated. Rather myopically in my opinion at the time, standards for voice calls were not defined in the early days, such was the focus on data. These only came as an afterthought. 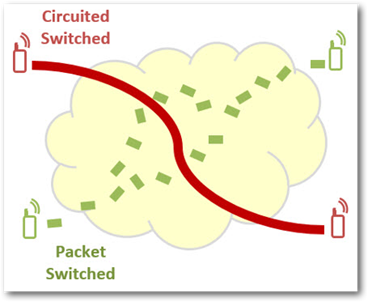 This has meant that all 2G base-stations in the Falkland Islands have had to be replaced by up-to-date 2G/[3G]/4G equipment that is capable of supporting an IP-network to provide 4G data services. This includes all the old 2G wireless cell base-stations scattered around Stanley.

So what happens to voice calls and SMS texts which are not the focus of 4G?

When 3G was standardised there was little belief in IP based data services, so data was pretty much ignored in the 3G standards definition. This was turned on its head in the early 4G standards.

In the frenzy caused by Internet growth when 4G was being defined, it was almost as if voice calling was ignored as being an irrelevant legacy service. Voice-over-IP is now the dominant protocol used for transporting telephony calls around the world. So, supporting voice calls on a 4G LTE network should have been easy – right?

In the 4G LTE world, there are three ways voice calls can be delivered.

As I’ve mentioned in previous posts, the telecoms industry loves using the term Over-The-Top services (OTT) which are hated by network operators as these apps lose them revenue. That battle is long lost though. Of course, what is meant by this acronym are the services so widely and loved in the Falkland Islands such as Skype, WhatsApp, Facebook Chat, Messenger or Telegram. This means that voice calls are transported over the LTE IP-network and overseas on the Internet.

Making voice calls using the IP-packet based 4G LTE network is based on a standard called ‘VoLTE’ or Voice-over-LTE’. VoLTE is now being rolled out by Mobile Network Operators around the world. There quite a few advantages to taking this approach. The most obvious of which is the ability to offer High Definition (HD) voice calls. For example, the Vodafone HD service is called 4G Calling. This is a brilliant product as the usual quality of a mobile call is so bad! 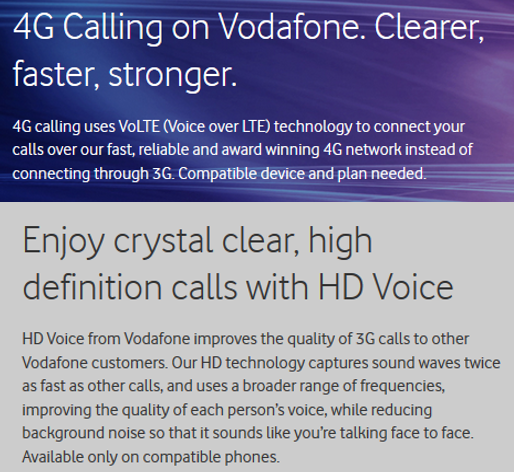 Another benefit is that there is no dependency on old legacy circuit switched voice-networks so, in the longer term, they may be scrapped. Other proposed or experienced benefits are faster call and SMS setup times, improved battery usage in smartphones, integration with voice over Wi-Fi services and true device interoperability. The latter is important as it means you can move a live voice call from a mobile phone to a tablet or desktop PC without dropping the call. See what Vodafone say below:

“With 4G calling you’ll enjoy a seamless experience when using your phone. Instead of switching to 3G or 2G, your phone stays on 4G when you make a call – so any apps you’re using keep their full 4G functionality and you can download content, play a video, or do anything else that relies on data streaming. Plus, you’ll connect more quickly and enjoy HD quality audio wherever 4G is available.”

There are also downsides, there is no interoperability between mobile operators as proprietary technical solutions are being adopted. But it will come in time.

In the Star Solutions use-case quoted above, states –  “… to offer GSM+LTE services including CSFB for voice” in the Falkland Islands. This is very interesting.

Circuit Switching Fall Back (CSFB) is designed to act as an interim solution to full availability of Voice-over-LTE or VoLTE. To restate, LTE doesn’t support circuit-switched voice calls because it’s an IP packet-switched network.

In a CSFB 4G LTE system (that is quite a mouthful!) when a voice call is made from a 4G LTE phone, the caller is backed-off or transferred to the 2G/3G network. In other words the caller is never active in the LTE network but just on the legacy 2G network. For this to work, mobile phones need to be dual mode – 2G and 4G. 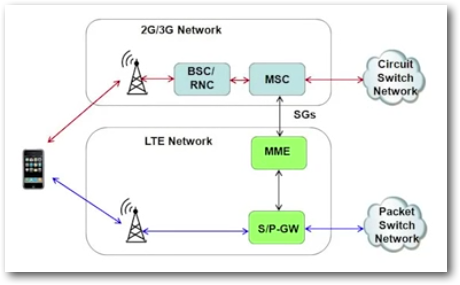 When a 4G LTE mobile phone is switched on, it registers with both the 4G LTE network and the legacy 2G/3G network which are in continual communication with each other. An interesting aspect of this is that once a voice call in initiated, IP data communication on the LTE network is suspended or considerably slowed down. If VoLTE is used, then data and voice can be used simultaneously.

The CSFB 4G LTE solution has been the default approach taken by many Mobile Network Operators around the world and is a way of migrating from a legacy 2G/3G service to a 4G service and as a step towards a High Definition VoLTE voice service.

It should be remembered that CSFB will be around for some time as old 2G mobile phones are unable to work with anything but a 2G network.

4G uptake in the Falkland Islands

In the UK, OFCOM stated: “The convenience of using the internet through a smartphone, and the availability of high-speed mobile networks, are key enablers of out-of-home internet use. Use of a smartphone increased from 27% of all adults in 2011 to 78% in 2018, while the proportion of mobile connections with access to 4G services rose from 3% in 2013 to 63% in 2017”

According to Sure Falkland Islands, as stated during Communications Week, “…there had only been a disappointing 30% uptake of 4G rather the 80% norm in other countries”.

There are a number of reasons why the uptake could be slow. Many consumers just don’t want to have or even use a smartphone for social reasons and/or would be unwilling to pay the high prices required to own a 4G capable mobile phone. Maybe this is a bigger issue in the Falkland Islands than in the UK where the social pressure is higher to use a Smartphone?

I started looking at 4G as implemented in the Falkland Islands in more detail because I wrote a post about issues encountered with overseas SMS deliveries – Do you have difficulty receiving or sending overseas SMS texts? and a post about the importance of Two-Factor Authentication. Since then, Sure Falkland Islands has acknowledged an issue with delayed SMS messages even for in-island SMS texts.

It is generally acknowledged that using CSFB, voice call and SMS text set-up times are extended due to the need to switch radio networks and then establishing a circuit-switched call. Although CSFB is a commonly deployed approach to enable migration from a legacy 2G/3G network to a 4G LTE voice service, it is likely that the issues of SMS text delays are associated with the transfer of SMS messages from the packet-switched LTE network to the  circuit-switched 2G network, even if this legacy standard network consists of an entirely new infrastructure installed by Star Solutions in 2018.

Of course, I’m happy to be corrected if I’m off the mark.

I also wonder, if all the 2G equipment was probably replaced with 2G/3G/LTE compatible equipment, why the mobile service could not offer 3G connectivity as well as 2G? Although this would not be relevant for Falkland Islanders, it could be beneficial for roaming visitors.

Island TV as I’m sure its customers would be very interested in understanding the challenges they faced. It would also be good PR for the company I would have thought? Penguin news / FITV why not give Sure Falkland Islands a call?

As a last thought, I wonder when Falkland Islanders be able to use an HD voice service on their 4G phones for local calls? Now that really would be an innovation!