The South Georgia Government have now completed their consultation so now it is the turn of the British Antarctic Territory Government which is now undergoing a similar exercise. This is good news!

This new legislation will provide power to issue licences for the establishment and operation of amateur radio stations within the British Antarctic Territory. Further information about the consultation and the draft Communications (Wireless Telegraphy) Ordinance 2021 and draft Communications (Wireless Telegraphy) (Issuance of Amateur Radio Licences) Regulations 2021 are available to view on the British Antarctic Territory Government website, at the link below.

We would welcome any comments on the draft legislation by 10 November to the Polar Regions mailbox (polarregions@fcdo.gov.uk).

This is an interview on FITV with Laura Sinclair Willis  – Chief Executive of the Government of South Georgia & the South Sandwich Islands. Thanks FITV!

We are pleased to announce that South Georgia and the South Sandwich Islands will adopt the prefix of VP0 for their amateur radio callsigns rather than VP8 (or even VP4!). This is brilliant news as it aligns with the prefix policy of many other South Atlantic and Antarctic DXCC entities. There is still clarification required to understand the use of ‘G’ and ‘S’ in suffixes, but this is in hand.

This has taken tremendous effort by Alan, VP8PJ and myself, together with other Antarctic amateurs over the last two years. We want to thank the SG&SSI Government team for all the efforts and enthusiasm they have displayed to create the new telecommunications policies, laws and licenses and policies to enable this to happen.

“The Government of South Georgia & the South Sandwich Islands is pleased to announce the opening of public consultation on a draft policy for amateur radio licensing.

The arrangements outlined in the policy are intended to be a temporary measure whilst a review of legislation within the territory is undertaken. The Government recognises that communications legislation is in need of further attention and improvement.

In order to chart the smoothest path from the present position (where no licences can be issued) to a position where individuals can apply for a licence, the Government has chosen to utilise an existing piece of law – The Wireless Telegraphy Ordinance Cap 78 – to provide a lawful framework for licensing. This legislation has been modified under the provisions of Section 12 of the South Georgia & the South Sandwich Islands Order 1985, to modernise some of the outdated language and to update certain roles within Government.

1. To delegate the administration of amateur radio licences to the Falkland Island Regulator, recognising that the Falkland Islands Government is better equipped to process applications and maintain a database of licence holders;

2. To issue amateur radio call signs with the prefix VP0, followed by an alphabetic character of either S or G. This recognises the petition of the amateur radio community on prefixes, balanced with the requirement by OFCOM for SGSSI and British Antarctic Territory to share a prefix across the 2 Territories;

3. To set a validation cycle of 5 years – in recognition of community feedback on this point; and

The draft policy can be seen here https://www.gov.gs/amateur-radio-licences-policy-consultation/ together with an online feedback form.

A previous post concerning this subject was published in September 2020 – Open letter to the Falkland Islands Regulator about South Georgia and Antarctic VP8 Amateur Radio Licensing. There has been little published or announced since then. This post has been triggered by a worrying development that has come to our attention from several sources. 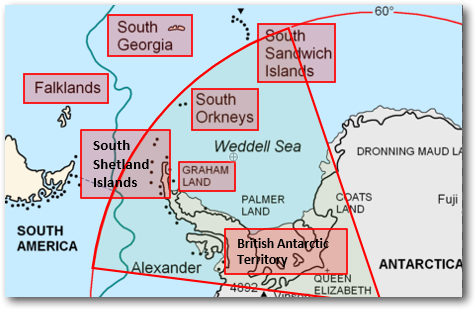 The following open email was sent out on 1st August to the worldwide amateur radio community and clearly states the concerns surrounding the Regulator’s proposal to use an old and defunct Caribbean prefix for the above entities.

An open email to the worldwide amateur radio community

This impasse has been ongoing since 2017 when the Falklands government abruptly stopped issuing VP8 licences to DXpeditions and other  amateurs wishing to operate from the Antarctic, South Georgia etc.

The logical solution would be to allocate new prefixes to the former Dependencies and the strongest candidates would be VPØ for British Antarctic Territory (BAT) because several nations already use Ø to indicate an Antarctic station e.g. VKØ. DPØ, HFØ etc. and ZDØ for South Georgia & South Sandwich Islands (SGSSI) because it is the southernmost of Britain’s Mid Atlantic territories (the others being ZD7,  ZD8 & ZD9).

Both these prefixes are available and have never been allocated before. They are eminently suitable for these locations and are probably what most DXers would prefer.  Note that BAT and SGSSI are separate British Overseas Territories and therefore each requires its own separate prefix.

The Falkland Islands Communications Regulator has never invited any public consultation on this matter, nevertheless VPØ and ZDØ have been previously suggested to him as the logical choices for these rare DX locations. Unfortunately, these suggestions seem to have fallen on deaf ears.

Instead, it is now rumoured that the Falklands Government is about to revive a defunct Caribbean prefix (VP4, formerly Trinidad & Tobago) and apply it to two separate British territories in the Antarctic by subdividing the suffix e.g. VP4Axx for SGSSI (South Georgia and South Sandwich) and VP4Bxx for BAT (Antarctic Peninsula, South Orkneys & South Shetlands).

For more details, see the various posts on  https://www.openfalklands.com/

If you think that resurrecting a defunct Caribbean prefix for use in the Antarctic and subdividing the suffix is a really bad idea and wish to lobby for a proper solution with new prefixes to be implemented you should contact the following Falkland Islands government officials as soon as possible and make your sentiments known:

The resurrection of a defunct Caribbean prefix for use in the Antarctic and South Atlantic does not accord with the internationally accepted Amateur Radio convention. Moreover, it is a rather slipshod and unprofessional solution that will cause much confusion, especially to the several million amateurs worldwide who do not have a good command of English or who only operate using Morse Code. When a new territory is declared, the usual procedure is that the relevant regulatory body assigns a new callsign prefix to that territory, not an old one from somewhere else.

Furthermore, the international convention (International Telecommunication Union Article RR-19, 19.67, 19.68 & 19.69), mandates that amateur radio callsign prefixes must be composed of either two or three alphanumeric characters with the final character being a numeral from 0 to 9.   It is this final numeral in the prefix that uniquely identifies the callsign as belonging to an amateur station.

The callsign suffix (individually allocated to each station by the local regulatory authority) then comprises one to four characters, the last of which must be a letter. Thus, territories with small amateur populations such as BAT & SGSSI would only ever need a one or two-letter suffix.

Whilst VP4 accords with the above, VP4A and VP4B do not. They are demonstrably not bona fide callsign prefixes by ITU standards and therefore they should not be used in the manner proposed.

The logical solution would be to use the next available prefix number in the VP series up from Falkland’s VP8, i.e. VP9, however, this is already allocated to Bermuda. This leaves VP0, which has never been allocated before. Note that ITU regulations permit the use of 0 in amateur callsigns and several other administrations already use 0 to indicate an Antarctic amateur prefix.

The Falkland Islands Government promotes the Islands as a “Gateway to Antarctica”. Indeed, most big-ticket Amateur Radio expeditions to the Antarctic regions in the last 40 years have departed from Stanley and have contributed significantly to the local economy.   However, it is unlikely anyone will ever consider organising a future expedition via the Falklands unless this ongoing Antarctic Amateur radio licencing and callsign prefix issue is satisfactorily resolved.

For example, to the astonishment of the Amateur Radio community, the last such expedition to the South Orkney Islands early last year was denied a £20 VP8 licence by the previous Communications Regulator.

Therefore, the expedition organisers decided that the still valid personal VP8 callsign of one of the team members would be used and that the charter vessel would depart from Punta Arenas instead.  Consequently, several hundred thousand dollars that would have been spent in the Falklands on local car hire, accommodation, expedition food & supplies, vessel bunkering, harbour fees etc., ended up being spent in Chile.

Therefore, we strongly propose that the choice of prefix be placed on hold so that a proper review of what prefixes to use can occur. This should be an open review with public comment invited from the worldwide amateur radio community.