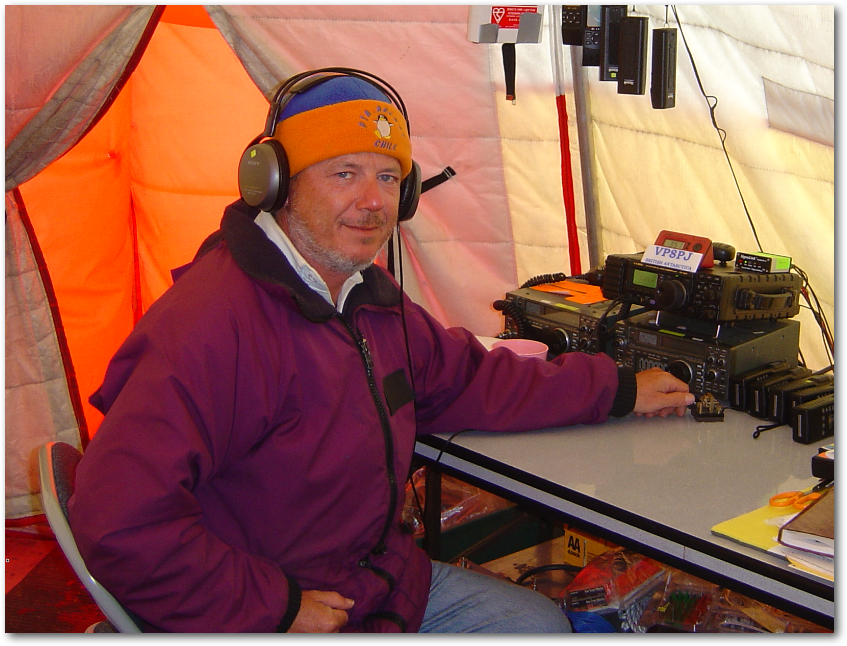 Alan, VP8PJ operating in the Antarctic

As stated in the January 2020 post by the Regulator – Amateur Radio Licence Consultation, “All licences held by overseas licensees are assumed to have expired”.

Unfortunately, this includes all the lifetime non-resident VP8 licences previously issued by the Falkland Islands Government (FIG) for use in South Georgia and the Antarctic regions (the former Falkland Islands Dependencies). Nearly all these VP8 callsigns have been held by non-resident UK and other overseas licensees for many years.  Even though several of them went through the re-validation process in good faith, they were nevertheless still advised by the Regulator that they now “….no longer qualify for a lifetime licence” because they do not meet the newly introduced Falkland Islands residency requirements.

As far as we are aware, none of these lifetime VP8 Antarctic / South Georgia licences has been re-validated, so it is presumed that the Regulator has in effect revoked them and these rare and much sought after callsigns are no longer valid.

Even VP8ADE, the only amateur radio beacon in Antarctica, used to study ionospheric radio propagation in the region, has been caught up in this debacle.

Since this is a matter of considerable interest to millions of amateur radio enthusiasts worldwide, we will delve into some of the issues involved.

Let us start by saying that the history of VP8 licencing is somewhat obscure, so if we state anything that could be considered incorrect, please assist us by making corrections in the comment field below.

As with many things in the South Atlantic, there appears to have been a long history of individuals and authorities taking a pragmatic approach to VP8 licensing. Whilst there was indeed a lack of good record-keeping and overall supervision over the years, it was nevertheless a licencing system that served its purpose reasonably well for decades. Now there’s been a swing in the other direction with the introduction of what could be regarded as over-zealous regulation.

Prior to 1962, the Falkland Islands Government was the governing entity for all British interests in the South Atlantic. These were:

There were (and still are) no permanent residents in any of these remote regions; therefore, there was no local government infrastructure to speak of except for a few officials who were overseeing whaling operations at Grytviken on South Georgia.  Instead, they were governed from Stanley by the Falkland Islands Govt. (FIG) and were known collectively as the ‘Falkland Islands Dependencies’.

British Interests in the South Atlantic

Since these regions were dependencies, the VP8 prefix also applied to them, and the Falkland Islands Govt. began issuing inclusive VP8 amateur radio licences for all the Dependencies from 1945 onwards. These were primarily issued to radio amateur members of the newly created Falkland Islands Dependencies Survey (FIDS) who were working out of small survey bases dotted along the Grahamland coast and outlying island groups.

Many such licences were issued over the years as amateur radio was a popular hobby in these remote locations as it was a means of contacting friends & family back home when short-wave propagation conditions were favourable.

Although BAT was now technically a separate jurisdiction, the Falkland Islands Govt. nevertheless continued as the de facto licencing authority and continued issuing VP8 licences for use in BAT from 1962 onwards. These were mostly issued to radio enthusiast members of BAS who were stationed at one of the remote research bases for periods of up to 3 years. Nothing has ever been said or done through the intervening years to suggest that FIG was exceeding its authority or that these licences were not valid.

Again, although SG&SSI was now a separate jurisdiction, the Falkland Islands Govt. continued acting as the de facto licencing authority. FIG continued issuing VP8 licences from 1985 onwards to radio enthusiast members of BAS working on the Island and to HM Forces enthusiasts stationed at the King Edward Point military garrison.

Again, there was nothing ever said or done during the intervening years to suggest that FIG was exceeding its authority or that these licences were not genuine.

From around 1985 onwards, all these licences were issued for life after payment of a one-off fee.

The central issue today is that, as far as we are aware, the Regulator has not re-validated any of these existing lifetime VP8 BAT and/or SG&SSI licences. We therefore assume that they have in effect been revoked, although the reasons for this remain unclear.

The new Communications Ordinance (2017) is the basis for the new VP8 Amateur Radio Licence Terms & Conditions. However, it only applies to the Falkland Islands and territorial waters; there is no mention whatsoever of the former Dependencies (now the separate jurisdictions of BAT and SG&SSI).

From a constitutional angle, radio licences for SG&SSI or BAT should have been issued by the relevant authority of each territory once they became independent.  In reality, we know that no action was ever taken by the SG&SSI or BAT authorities and, instead, FIG in Stanley continued to issue them on a de facto basis.

Under the new Communications Ordinance, the Regulator is empowered to act within the legal boundaries of the Falkland Islands only. Therefore his decision to revoke or re-validate historic lifetime non-resident licences can only apply to Falkland Islands VP8 licences.

The Regulator has no legal authority to act outside of his jurisdiction; therefore it follows that he was not empowered to make any determination regarding existing lifetime VP8 BAT and SG&SSI licences during his recent re-validation exercise unless he had the express consent of the BAT and SG&SSI authorities at the time to do so.

In other words, the Regulator had no authority to assume that all existing overseas lifetime VP8 Antarctic and South Georgia licences had expired, nor was he empowered to revoke any of them. However, it seems evident that he has nevertheless done so.

Due to the poor state of the VP8 licence database, it may have been difficult to differentiate between VP8 licences issued for the Falkland Islands and those issued for use in the former Dependencies.   It is therefore likely that existing lifetime BAT and SG&SSI overseas licensees were simply all lumped together with the non-resident Falklands licensees and their VP8 licences all revoked en masse as part of the re-validation exercise. This was a highly risky undertaking unless the consequences of such an action were fully appreciated beforehand.

What are the arrangements for issuing new licences?

VP8 radio amateurs in each territory are now affected in different ways.

All existing licences issued for use in SG&SSI have been revoked by the Regulator (irrespective of whether he had the authority to do so).

This policy paper is primarily concerned with agreeing to open discussions with the BAT and SG&SSI administrations and the Regulator’s possible role in issuing new, temporary licences until such time as proper de jure arrangements have been implemented sometime in the future.

How to treat existing lifetime VP8 Antarctic & South Georgia licences or the fact that they had recently been revoked are not even mentioned. This represents a significant oversight which has had a big impact on the radio amateur community.

In late July 2020 the Regulator talked about the issue in an interview on Falkland Islands Radio Service (FIRS) which can be heard below:

On August 28th 2020, the SG&SSI Govt. issued the following statement.

The administrations for BAT and SGSSI are seeking to secure a long term solution to this problem. In the meantime, The Falkland Islands Communication Regulator has agreed to provide temporary licences.”

BAT VP8 licences: All existing VP8 licences issued for use in BAT have been revoked by the Regulator (irrespective of whether he had the authority to do so).

On August 28th 2020, the British Antarctic Territory Govt. issued the same statement as the SG&SSI Govt. on their web site.

These statements, though warmly welcomed, only apply to the issuing of new “temporary” licences for such future activities such as one-off, short-stay DXpeditions; they do not address the genuine issue of those existing lifetime VP8 licensees already visiting BAT and SG&SSI for more extended regular stays who have just had their licences revoked for seemingly no good reason.

For some unknown reason, the Falkland Islands Regulator has not placed the same guidance on his web page.

The current situation is that, whether accidental or not, the Regulator’s recent licence re-validation exercise has rendered all existing VP8 amateur radio activity in BAT and SG&SSI illegal, leaving all current lifetime VP8 BAT and SG&SSI licence holders in a state of confusion.

Millions of amateur radio enthusiasts worldwide are also wondering what is happening in the South Atlantic since contacts with South Georgia and Antarctic VP8 stations are highly sought after.

The sensible interim approach would be for the Regulator to be proactive and immediately restore all the lifetime VP8 BAT and SG&SSI licences that were seemingly revoked in error, thus allowing legitimate amateur radio operation with British callsigns in these remote regions to continue unabated.

We therefore request that the Regulator makes a clear public statement to this effect immediately.

Failing that, a full explanation as to why these Antarctic & South Georgia VP8 licences were revoked and why they must now remain cancelled, even though the Falkland Islands Govt. had previously issued them for life.

We do hope that the relevant government stakeholders will prioritize this issue, and a workable solution to this impasse can be implemented as soon as possible.

If you have any questions about the status of your recently revoked lifetime British Antarctic Territory and South Georgia & South Sandwich Islands VP8 amateur radio licences, please contact the Falkland Islands Communications Regulator as soon as possible as the re-validation exercise is now deemed to be complete.

Note to editors: You are welcome to reproduce or paraphrase any text from this page without seeking our permission.